We morph through the ouroboros

We Morph Through The Ouroboros 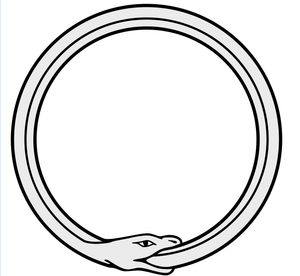 A simple representation of the ouroboros, the serpent that bites its own tail, representative of cyclicity

Written and performed by Nasim Patel, produced by Hanif Patel

we morph through the ouroboros, a rap written to think about how the body will transform as it pushes and is pushed into the future. There is an assumed understanding that the body will progress solely through the digital, a path that will 'naturally' result in the amalgamation of flesh and mesh, bone and code, a true vanishing point of 'humanity'. Our veins will creep like vines outside of our body, spreading and replicating like the boats of history. The act of digitising and its surrounding terminology reflect organic processes. Sometimes unintentionally, such as colonising processes functioning akin to a virus spreading in a body, or intentionally, such as the creation of planes that mimic birds. In giving titles to digital inventions we use naturalistic or physical terms. We can see these in how we 'stream' content online, falsely giving us a conception that data is being passed into our community through some physical body of water that can be effectively blocked or diverted. Ports originally as docks for ships to arrive in and transfer goods now refer to points of information transfer through Universal Serial 'Buses'.

How I made | How we morph

I digitise human vocals for the sake of creating product. The producer, my brother, Hanif, sacrifices the liveness of his guitar strings to support my vocals. This process willingly sacrifices the organic, the alive, to export a file. A transformative process that makes neurons into oscillations into vibrations into digital. The resulting imitation can be shared and when listened to, my mouth and an implied body to support it is imagined. This body now exists in your neurons ― I have made the journey, thank you for having me.

Nafs is an Arabic term for the self, the soul, the spirit. Our blood intermingles with the digital and with it, our nafs converts into binary, but simultaneously out of binary. Binary code is not two different numbers like 1 and 2, it is 0 and 1, off and on, presence and absence. They are not two different ways to be, but two different states of being. Within these states, spectrums cease. In this way, Adam and Eve existed together as 1. However, they existed as two distinct vessels, both relatively empty until knowledge informed them of sin. Our hunger for knowledge has led to a sharp increase in technology. It replaces, spreads, then replaces once more.

Is the body ambivalent? How much agency or consciousness do we ascribe to the body? The 'West' launched (and continues to launch) off the legacy of mind-body dualism, the separation of mind and body. Under this logic, the mind can have dominion over the body. Interestingly, we often refer to computers as 'brains', or outsource our mental work to them. If brains rule bodies, who now has the power in this integrated future? What about machines, which we use to supplant our physical work? In moving forward, we tentatively invite a future where humans become mere bodies ruled by the digital.

Here: An example of organic digitisation in Soma, a sci-fi body horror video game, where an AI has integrated with underwater coral organisms and begins to hybridify humans.

Parallel lines travel, but they will never meet

Across time, they wrangle with the space left between

Like a double helix spiral that gets crammed into the spittle

Dust to dust, ashes to ashes, atoms to atoms

The rungs reach longingly twixt the Eves and Adams

Our nafs seems to bond within a spectrum so ambiguous

Interesting, the body seems a product of ambivalence

It moves in leapfrogs, pinballing pistons

An input delay, lag within the system

In directions undetermined, yet to render any surface

And it's getting-getting further, you can see it in horizons

Infinite in potential, limited by fences

A mown lawn void where the grass aims to dissect them

So twiddle all appendages, find they're in attendance

While someone whips the wheel and another grips the rudder

And a third holds the capstan firm with sheer mana

Sailing down a face upon a trickle of sweat

Pooling in the port with a click of the neck

The interface garbled, graffiti on the wall

Sit amidst the marvel of a people creeping forward

With an organising principle of mimicking it all

Decide: plug it up or plug it in

Augment the skin with hypothetical sin

From swimming with fins to cannibalising kin

Finally, the stimulant to entering the visceral

Pinned under the fangs of the ouroboros ring

Written and performed by Nasim Patel, produced by Hanif Patel in Melbourne, Australia on Naarm, Ngunnawal and Ngambri land in Canberra, and on Gadigal land in Sydney

How will we take our bodies with us into the future